The CEO of Croatian Railways' (HZ) Passenger Transport division, Drazen Ratkovic, on Friday apologised to passengers for the recent delays and cancellations in train arrivals and advised passengers that they could request a reimbursement of their fares.

On the first day of the 'cold snap' that paralysed the country's transport on Saturday, December 8, 115 of 717 scheduled trains were cancelled and 87 were cancelled on Thursday, said Ratkovic.

Ratkovic claims that the main reason for the cancellations and delays were the outdatedness of trains which is particularly evident in extreme climatic conditions. Another problem is that the HZ cannot advise passengers of delays as not all railway stations are sufficiently equipped. 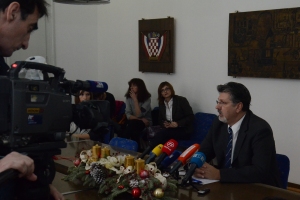 Most HZ locomotives on average are thirty years old which means that they cannot be maintained without high costs so that delays and cancellations can be expected in the future too, he said.

HZ Passenger Transport will today advertise a tender for the procurement of 32 electric trains - 16 for commuter and 16 for regional transport.

The tender is valued at EUR170 mln. Before year's end HZ will advertise a public tender for the procurement of 12 diesel motor trains, said Ratkovic.