The Meeting was held on August 30 – September 3, 2012. Directors General of the Civil Aviation Authorities of 44 countries together with top officials of International Civil Aviation Organizations participated in the event.

Seeing it as the unique opportunity to demonstrate country’s achievements in the field of civil aviation and its potential in this direction, GCAA took initiative to host the event, which is the 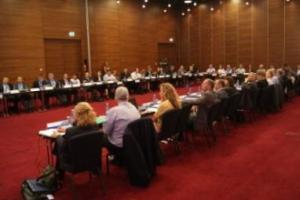 first high-level official Meeting to be held in Georgia in the aviation sphere.

Summing up the ECAC Secretariat activities since DGCA/138, ECAC’s external relations policy, future priorities of the Organization, funding of the ECAC Special Project Fund for 2013-15, preparation for next ICAO Assembly and other important issues were discussed during the sessions. The Meeting was presided by Salvatore Sciacchitano, Executive Secretary of ECAC.