Croatia asked Austria to increase the issuing of the number of transit and bilateral permits for road transport, Croatia also asked for Austria’s support in receiving financial assets from the EU pre – accession funds for the reconstruction of domestic inland water-ways and river ports. This was stated on today’s meeting between the Croatian State Secretaries for Traffic and for Sea and the Austrian State Secretary for Traffic Helmut Kuckacka.

The State Secretary for Transport Dražen Breglec stated that considering Croatia’s needs they had asked for an adjustment of the number of transit and bilateral permits for the road transport of goods through Austria. He expressed his hopes that a compromise would be possible between the two countries related to this question, but he would not give a more precise answer.

Kukacka expressed Austria’s intention to reroute as much traffic as possible towards the railway and inland navigation. He explained that the Austrian Government was very restrictive regarding issuing those permits to countries non-members of the EU; the local population was against it due to heavy traffic.

The State Secretary for the Sea Branko Bačić confirmed that they had introduced Kukacka to Croatia’s plans related to road construction, especially in the area of the Pan - European Corridor X. He said that the building activities in the Croatian part (Graz-Maribor-Macelj-Zagreb) would be finalized in April 2007, which was very interesting to the Austrians who were involved in the project. 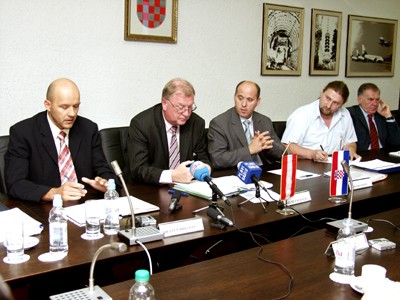 Kukacka meant that Austria was very interested in an expeditious finalization of the route from Maribor to Zagreb, claiming that Austria and Croatia would try to stimulate Slovenia to speed up the building activities in their part of the Corridor.

Austria is more than interested in inland transport and next year by taking over the Presidency of the EU, it will draw up a general document for creating a strategy which will help to realize projects related to inland navigation, said Kukacka. He added that they wanted to connect all Danube basin countries, including Croatia, inviting our representatives to attend the European Congress on Inland Transport, around mid February 2006, where they will have the opportunity to present their project.

Bačić added that they had asked Austria to help Croatia in joining the process of modernizing river ports which were of state importance, mainly by including the Vukovar ports into the pre-accession funds of the EU.

He also said that Austrian experts would be a great help in drawing up an analysis of cost and gains and other various documents necessary for such projects. The Austrians could present to the Croatian side their knowledge and experience in implementing the IT system along the river Danube. This would be of great use to Croatia for the Sava River.

For the projects regarding the 1st phase of modernization of the four Croatian ports of state importance, EUR 132 million have to be secured until 2010. For the Port Vukovar EUR 60 – 70 million are necessary, for Port Sisak EUR 5 million, Port Slavonski Brod EUR 19 million, and for the Port Osijek EUR 38 million. The World Bank and the European Bank for Reconstruction and Development have shown interest for financing those projects.